On this guided tour you'll get to know all of the Pushkin Museum's most famous monuments - in Russia's second most important museum dedicated to European art. 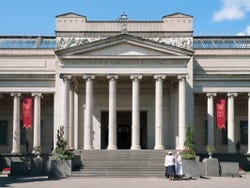 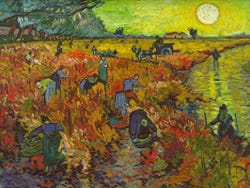 The tour of the Pushkin Museum begins in the Modern Art building, where our guide will explain its most important works of art, known for its vast collection of French impressionist and postimpressionist paintings. Here we'll have two hours to soak up European and American art from the 19th and 20th centuries.

Among the works on show, there is The Red Vineyard by Vincent Van Gogh, considered the only painting he sold during his lifetime, and we'll enjoy the art of Paul Gauguin, with his Café de Nuit, Arles or Edgar Degas and his Blue Dancers.

Then we'll head to the Ancient Art building - the museum's main room. Here you can find works dating from antiquity up until the 19th century. Some of the most popular works, which we'll see on this guided tour, include Ahasuerus and Haman at the Feast of Esther by Rembrandt, Jordaan's Odysseus in the Cave of Polyphemus, and The Archangel St Raphael by Murillo, as well as any number of archaeological treasures and classic sculptures.

The Pushkin Museum is one of Moscow's must-see sights. Accompanied by an expert guide, you'll see its most important works in barely three hours, providing insight and knowledge along the a comfortable, complete, tour.

Entry to the Pushkin Museum.

25% discount on the official ticket price.

Wheelchair accessible. This must be indicated in the reservation. An accompanying person is required.

Free! Free cancellation up to 24 hours before the activity starts. If you cancel under this time or do not show up, you will not be refunded.