Are you looking for a unique experience on your trip to Moscow? Drive a soviet tank and shoot a bazooka on this incredible tour! 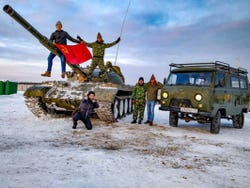 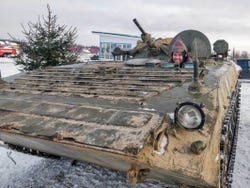 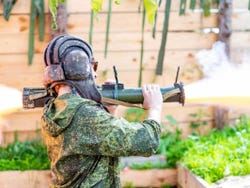 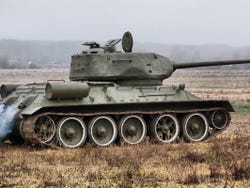 After picking you up from your hotel in Moscow at 9:30 am, we'll hop into a real Soviet van that will take us to the Park Patriot military base, located in the outskirts of Moscow.

Once we arrive we'll receive a safety briefing from the military personnel at the base. We'll explore the military base, which houses an exhibition centre and a museum of the Russian army, where we'll get to test the official T-80 tank simulator. After the theory class, we'll enjoy one of the most famous Russian traditions: a shot of vodka!

Next, we'll get kitted out in the uniforms, gloves and helmets ready to drive a Soviet tank! All participants will get the chance to drive the tank during the activity, which will be coordinated by the Russian military. And that's not all! You'll also get to fire some of the world's most iconic weapons, such as a Kalashnikov and a Bazooka.

From the military base we'll take you back to your hotel in Moscow for 6:30 pm.

The tanks are driven at a military base on the outskirts of Moscow. The activity will focus on driving a former Soviet tank: a T-80, the most prominent in the Soviet Union during the 1970s and 1980s.

No special license or permit is required to drive the tanks. The necessary permits for driving in the military base facilities and its surrounding areas are already included in the activity.

Children under five years old and anyone with muscular problems or illnesses are not allowed to participate in this activity.

The activity is led by expert military personnel who have many years of experience. The shooting practices are carried out in a restricted area where there is no risk of putting others in danger and non-lethal ammunition is used. Therefore, this activity is totally safe - all you have to worry about is making the most of this incredible experience!

All of our providers comply with local legislation and applicable health recommendations to avoid the spread of Covid-19. Show more

Alcohol gel will be available before, during, and after the service.

All those running the service (guide, driver etc...) will wear a mask throughout its duration.

Hotel pick up and drop off.

Visit to the museum.

US$ 462.80
No hidden fees or surcharges
Free cancellation up to 48 hours before the service starts
Book

Free! Free cancellation up to 48 hours before the activity starts. If you cancel under this time or do not show up, you will not be refunded.
like