Despite Lenin's expressed desire to be buried with his mother in St. Petersburg, Stalin's orders in this regard were very clear and forceful. He commissioned Lenin to be embalmed to be exposed to the public, preserving his body by all possible means until the end of time.

Lenin's Mausoleum has a laboratory with its own team of experts (biologists, biochemists and anatomists) who take care of Lenin's "maintenance service". In a twisted futuristic tale worthy of an episode of Black Mirror, the former leader is "repaired" again and again to stay "alive" forever.

Not for all tastes

From our point of view, there are countless fascinating places to see in Moscow rather than dedicating time to Lenin's Mausoleum, but if you are interested in this peculiar visit, the advantage is that it's located in the middle of Red Square, next to the Kremlin, Saint Basil's Cathedral and the GUM Galleries, so you're bound to see it during your trip.

Today the future of the mausoleum is quite uncertain, as more and more voices are asking for Lenin to be buried so that he can finally rest in peace.

Depending on the date, there can be long queues to enter, although once inside the visit is relatively short. In order to maintain respect for Lenin, it is not possible to take photos inside the mausoleum, nor is it possible to enter wearing hats, caps or sunglasses. 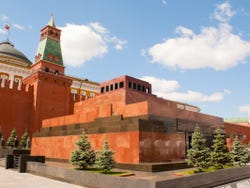 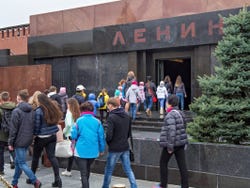 Can vary based on the date, we recommend checking before visiting.