Designed to be "palaces of the people", the different stations of Moscow's metro are spectacular examples of Socialist Realist art and architecture. Aside from providing fascinating insight into the city's history, the metro network is also an efficient and economical way to get around the Russian capital.

The Metro Moscow operates daily between 5:30 am and 1 am, with trains departing every 1 to 3 minutes during peak times. Outside of rush hour, trains are less frequent, every 4 to 7 minutes depending on the line and the time of day.

The price of a single ticket for the Moscow Metro is 55 Roubles. Single tickets allow you to change trains as many times as you like, with no limit on distance or time. To buy tickets, you may struggle to find English speaking staff, however you should be to communicate the number of tickets you need by holding up your fingers, and thankfully most stations now have simple automated machines that you can use too.

There are often long queues to buy tickets, so if you're planning to travel by metro a lot, we recommend buying multi-ride tickets to save time and money. You'll get a paper card which you tap on the reader to go through the turnstile.

Moscow Metro has 17 lines with a total length of 246 miles (397 km) divided into more than 230 stations (265 if we include the Moscow Central Circle). Each line is identified by a name, a number and a colour.

Guided tour of the Moscow Metro

Moscow's metro network is a museum in itself, and it's a must-see attraction on any trip to the Russian capital. The long marble corridors, fascinating Soviet-themed frescoes and gilded sculptures are truly captivating. To make the most of your visit and learn all about the symbolism and history behind some of the city's main metro stations, why not explore the network with an expert English-speaking guide? Take a look at our Guided Tour of the Moscow Metro to find out more! 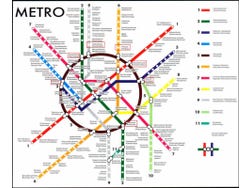