Vnukovo Airport is one of Moscow's four major airports and the third busiest in Russia. While it services a number of international destinations, it is noticeably smaller than Sheremetyevo and Domodedovo. Despite having two runways, only one terminal is used for both domestic and international flights.

There are different ways to get from Vnukovo International Airport to Moscow city centre. We've compiled a list of the most common options for you:

You can book a transfer through our website via the following link for only € 47 (US$ 51.10) per journey:

Book a transfer to Moscow from Vnukovo Airport

The bus is the cheapest option, although it isn't the most convenient. A journey from the airport to the Yugo-Zapadnaya and Troparyovo metro stations will cost you between ₽ 50 (US$ 0.70) and ₽ 120 (US$ 1.70).

The train runs between Sheremetyevo Airport and Kievskaya Station, which is on metro line 3 (blue line). From there, you can reach Red Square in less than 10 minutes by metro. The Aeroexpress operates between 6 am and midnight, takes 35 minutes and costs 420 RUB. 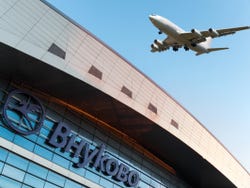