Moscow Domodedovo Airport is an international airport located to the southeast of the Russian capital. It's one of four major airports in the city and is one of the largest and busiest in Russia after Sheremetyevo Airport. It currently has one terminal building with separate concourses for domestic and international flights; a second terminal is under construction, and a third is in the pipeline.

Domodedovo Airport is an important link between Russia and some of the major cities in the East, although its facilities are also serviced by major domestic carriers. Among the frequent destinations that offer direct flights to Domodedovo Airport are certain European capitals like Berlin, Vienna, Munich and Istanbul.

There are different ways to get from Domodedovo Airport to downtown Moscow. Bear in mind there are no night bus options to Domodedovo so plan on a taxi or transfer service if you're travelling late. We've compiled a list of the most common options for you:

You can book a transfer through our website via the following link for only € 47 (US$ 51.10) per journey:

Book a transfer to Moscow from Domodedovo Airport

The bus is the cheapest option, although, as is the case in many destinations, it's not the most comfortable option. The journey from the airport to Domodedovskaya Station on metro line 2 (green line), takes around 35 minutes and will cost you between ₽ 50 (US$ 0.70) and ₽ 120 (US$ 1.70).

The train runs between Domodedovo Airport and Paveletsky Station, which is on metro line 2 (green line). From there, you can reach Red Square in less than 20 minutes by metro. The Aeroexpress operates between 6 am and midnight, takes 45 minutes and costs 420 RUB. 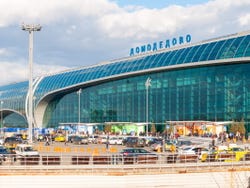 How to get to Moscow Sheremetyevo International Airport (SVO)