Russia's busiest airport, Sheremetyevo has six terminals: four international terminals (one of which is still under construction), one domestic and one for private aviation. Frequent destinations offering direct flights to Sheremetyevo Airport include Vienna, Budapest and Lisbon.

There are different ways to get from Sheremetyevo International Airport to downtown Moscow. We've compiled a list of the most common options for you:

Book a transfer to Moscow from Sheremetyevo Airport

The bus is the cheapest option, although it does not reach the city centre directly and takes a lot longer than other options, so it is not our most recommended mode of transport.

The train runs between Sheremetyevo Airport and Belrussky Station, which is on metro line 2 (green line). From there, you can reach Red Square in less than 5 minutes by metro. The Aeroexpress operates between 6 am and midnight, takes 35 minutes and costs 420 RUB.

The journey from the airport to the centre takes between one and a half and two hours depending on traffic, and the estimated taxi fare varies from 1000 RUB booked in advance, to 2500 RUB from the official taxi desk in the airport. 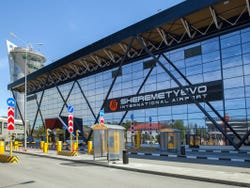