With its origins dating back to the 12th century as the main route to the Russian city of Tver (hence its name), Tverskaya Street (Ulitsa Tverskaya, in Russian) has long held importance in Moscow. By the 18th century, it had become the centre of social life and one of the most fashionable areas of the city for the nobility.

After the Bolshevik Revolution, the street underwent major remodelling, with Stalin ordering the demolition of historic buildings, including all five of Tverskaya's churches, to widen the avenue and build modernist high-rises in their place. Some of the buildings were physically moved to new locations further out of the street. Between 1935 and 1990, it was renamed Gorky Street after the Russian writer and revolutionary, before being returned to its former name by Gorbachev.

What to see on Tverskaya Street

Tversakya Street is one of Moscow's main thoroughfares and the mile-long (1.6 km) avenue is home to numerous places of interest. Despite Stalin's best efforts, a number of the street's original buildings still remain, alongside shopping opportunities for every taste. Don't miss the following highlights:

Tverskaya Street was the first avenue to have electric lighting and a pioneer in allowing trams to pass through. It is the street with the most history in Moscow and you're likely to stroll past its impressive monuments several times during your visit to the city. 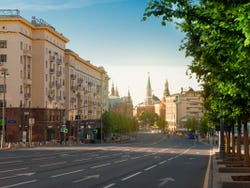 In the heart of Moscow, next to Red Square.