Moscow's restaurants, bars and cafes have dishes to suit all tastes and budgets, allowing everyone to sample the best of Russian cuisine! With a wealth of flavours reflecting the multiculturalism of the country, Moscow's gastronomy is based in simple and tasty ingredients that can survive cultivation in an extremely cold climate. We've compiled a list of some of the top Russian delicacies so you can decide what try during your trip!

What to eat in Moscow?

Where to eat in Moscow?

So you know what you're going to eat, now where's best to try it? When it comes to choosing cafes, bars and restaurants, if you're looking for a quick and cheap option, the two biggest chains are Teremok, which offers blinis for all tastes, and Kroshka Kartoshka, whose speciality is potatoes made in every possible way!

If you happen to visit the GUM Galleries in Red Square at lunchtime, you might want to take the opportunity to visit the Stolovaya 57 restaurant, an economical option amongst the luxury of this elegant shopping centre.

One of the most widespread food chains in the city is My-My. Offering basic and budget-friendly dishes in a self-service format, these cafeterias are a quick, cheap and good quality option, and easily recognisable by the figure of a black and white cow on the door! The traditional taverns in the Yolki Palki chain are another good choice to enjoy typical Russian food at very affordable prices. Plus, the advantage of self-service restaurants is that you can point to the foods you want, avoiding the language barrier!

When to eat in Moscow?

In Russia, mealtimes are relatively extended. Restaurants in Moscow are usually open between midday and 4 pm for lunch, and between 6 pm and 11 pm for dinner, although you'll probably find a fair few places that are open for 24 hours. 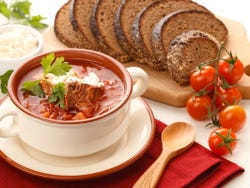 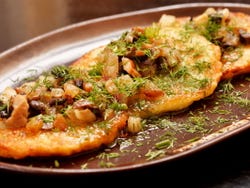